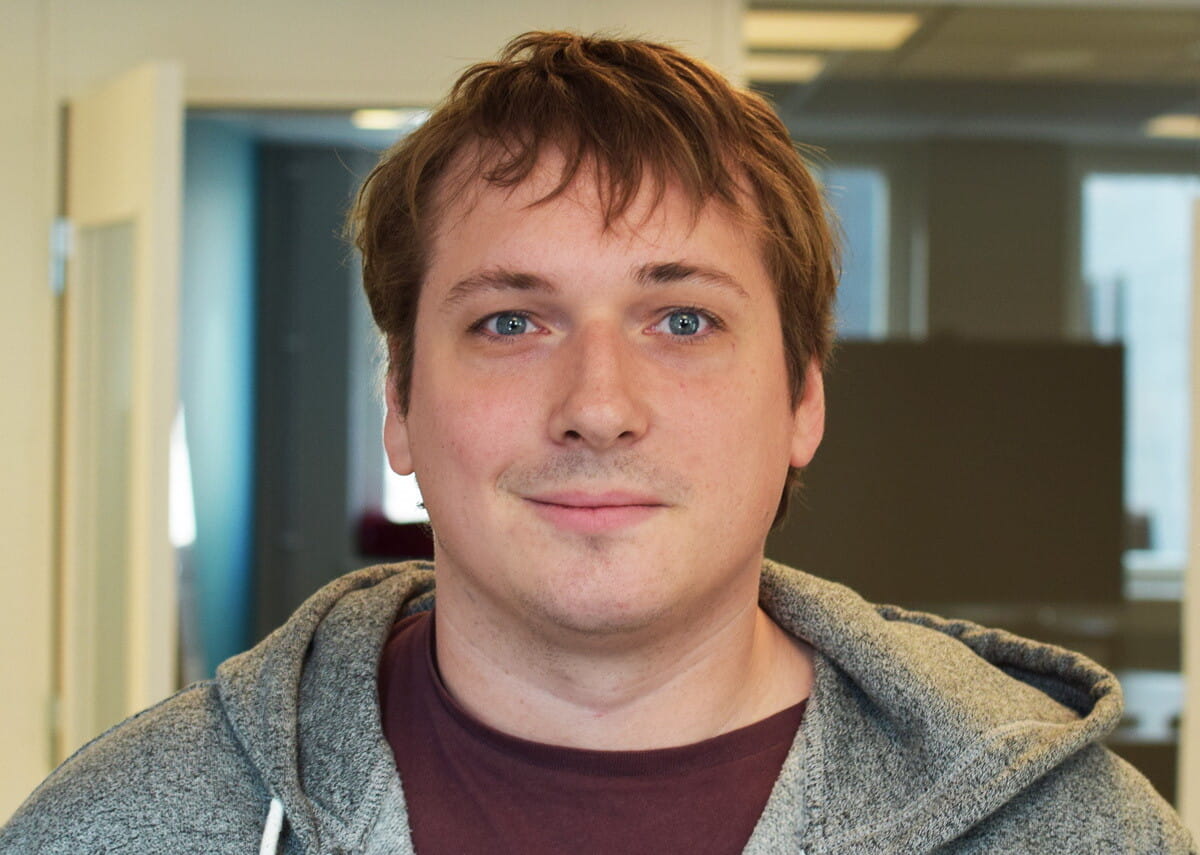 Kaj Mählqvist is one of the first developers to join Visiba Care back when the company and product were first created. Kaj, now a team lead, has seen the impact of Visiba's work as the company grew and tells us the whole story from the perspective of a veteran. We take a trip down memory lane, pick out a few highlights, and dig into his motivation and effervescent positivity!

You are one of the first developers at Visiba Care. How was it like then and when was ‘then’?

It was in August 2014 that I was on-paper employed by Visiba but before that, we were working with the company for eight months, in the evenings and weekends. It was really fun and that's why everyone was in from the beginning – no one was getting paid but of course there was the possibility of something blowing up – but mainly everyone was having fun! When we got hired, we had an ‘office’: we started in an unused room/closet in another company's area; a friend of Johan’s, our CEO, had a room that they didn't use so we ended up there.

What made you jump on board on such an early product?

The opportunity to be part of something bigger. It's amazing to get to play a key role in something as big as this. But I think the main point was that it was great fun. That early team came up with these crazy ideas about what we were going to build and Patrik(Westerlund, another developer who joined Visiba early on) and I got hands-on with building something cool. That was the main driving force, for me at least.

What were you doing before?

I was working as a web developer so I was in the same area, but I was doing one project for two months and then jump into the next one and the next one. It was nothing like this, where we build a large product and keep developing it and making it better. That's something I was missing – it can be a bit tedious to do something and then start over and do it again and again. When you've done it 10 times, it's like copy-pasting and it doesn't feel that meaningful. At Visiba, we get to do that but we always get to go back and improve it and iterate because we want to make a great product – that part won me over.

What is one thing you wouldn't compromise in development or an aspect you believe cannot be missing from development?

I'm very flexible but at the same time, if someone tells me to do something that I really think is a bad decision, they will have a darn good argument to win over! Modern technology the most important thing for me because a) that's what makes work fun and also b) it enables us to build a great product. We are always trying to stay ahead and use the latest technologies, both to attract new talent but also to be able to build the new cool stuff that people expect us to. If we're using some ancient technology and want to build features that people use, that's not going to happen. Also, working with a product company like this I think that all the work the product team does is extremely important. We have a good reason for everything we're building. Knowing why we're doing this makes work meaningful but it also it is better for me and my team because we can imagine how the things we're building will be used and our input is better. We can take decisions based on the research and not just what we think ‘works’.

The Engineering team at Visiba has exploded in the last two years. What has changed with this growth?

Everything! But mainly there is better ownership. In the beginning, we were all stretched pretty thin; everyone was doing a bit of everything and that worked fine when the product was small. I had a very clear overview of it, I wrote most of the code. But when the team grew, it got harder and harder to be involved everywhere. When we got to be enough people, we were able to split up into the more featured teams where everyone can take ownership, care about their output, and be involved in the things they're doing – I think that's the most important part and it happened organically.

What motivates you every morning?

Currently, the new puppy that attacks me! It is very busy and of course, sometimes you might need a break, but for me that break is usually 5 minutes then I want to get back to doing work stuff! I just find it always fun to go to work and even if I am doing some task that is not the most interesting to me, because of course, that's going to happen, then it's always fun to meet my colleagues. There's always something to get out of work and it's a mix of the interaction with my colleagues and the work itself.

What is something that made you proud in the last year?

I'm proud of how well my team and the entire tech department handled the split into feature teams. The way everything just fell into place and people taking responsibility and ownership. We were quite afraid to make the move and thought that we should do it very slowly, but in the end, we didn't! It went fast and everything is worked out perfectly – and that is thanks to the great people we have working with us.

How do you spend your time outside of work?

I’m a family man, I have three small kids and that takes most of the time. We are now teaching them how to ski and that’s tough! It goes well for one go then they get bored. They love it and they have so much fun – you ask them 400 times if it’s fun and they say ‘yes, it’s fun!’ and then they get to the bottom of the slope and they are done! But I know I was the same when I was a kid: I wanted to do one go and then I would want to have ‘fika’!

Finish this sentence: ‘Kaj is the one who…’

I used to usually describe myself as the one who steals everyone else's hobbies!

Connect with us to stay up to date on new openings.

Let’s recruit together and find your next colleague.